"This book is a journey: to places of inspiration, to the backstage area, to archives, notebooks, text worlds and thus through 131 productions in 67 countries and 266 cities, reflected from 7 different perspectives in over 2000 photos, 80 script excerpts and two essays."

With over 2000 photos
Text excerpts from 80 productions

Based on the premise "There is no show without audience", the members of the Rimini Protokoll collective have for years radically changed  the way of understanding the theater. Except for the audience, considered a "partner", they practice nothing more of what is considered to be the conventional theater. Decades ago, they brought reality to the stage and eliminated architecture from theatrical action. They are considered classics in the use of new formats: they work to bring people together and to talk about being together.

“Reality has entered the scene strongly. And when I say ‘reality’ I don’t mean the news of the day, but the people on the street. The Rimini Protokoll lead them both two and a half decades ahead.” 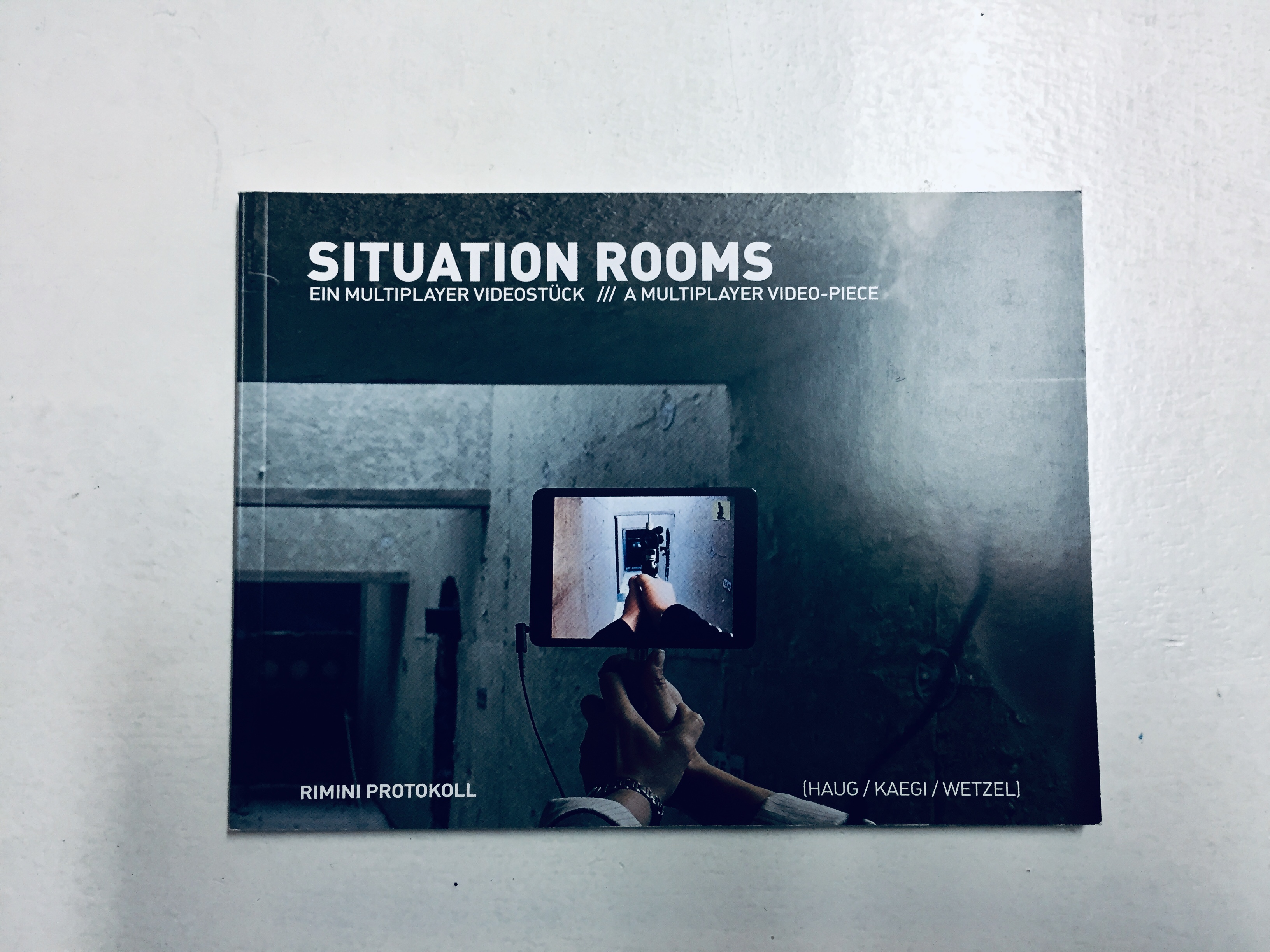 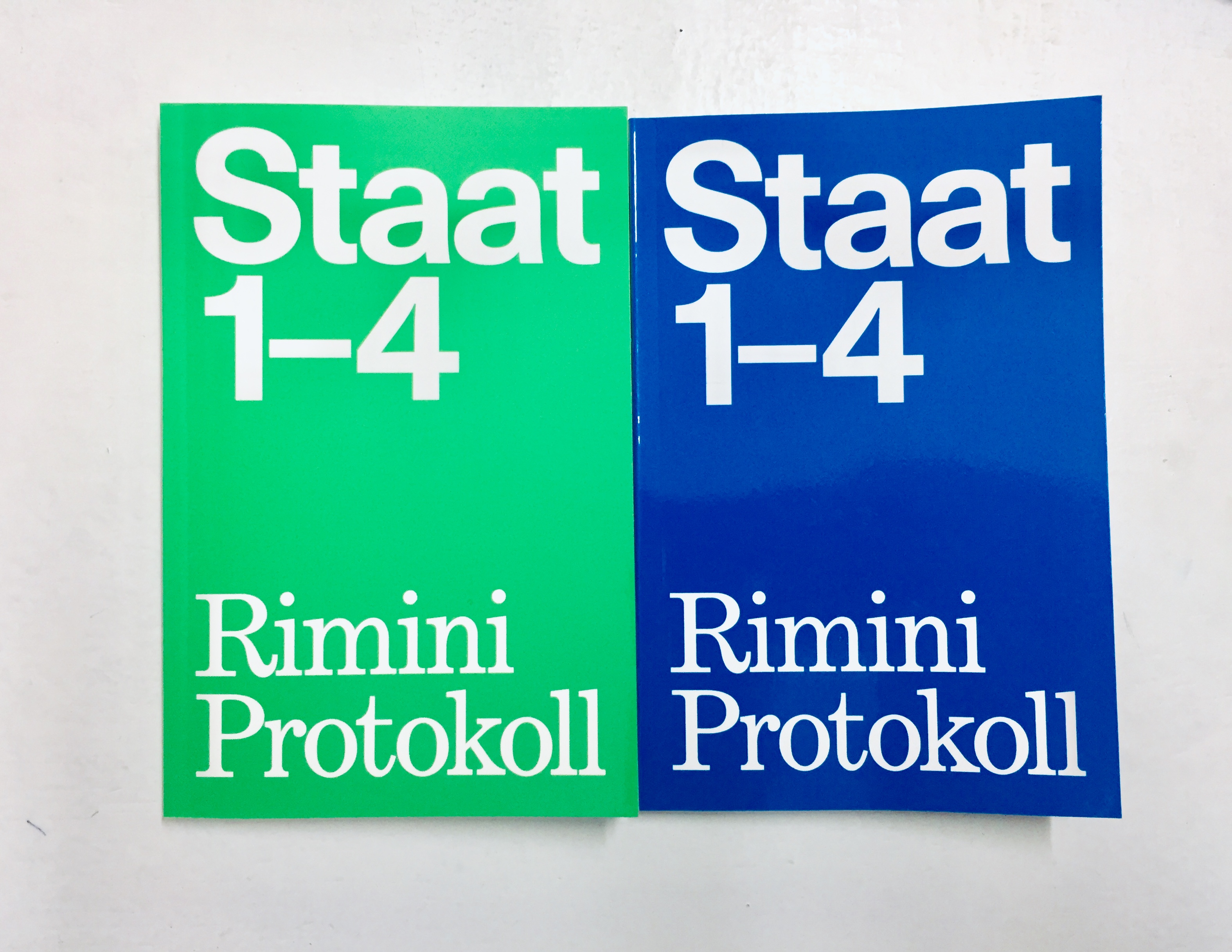 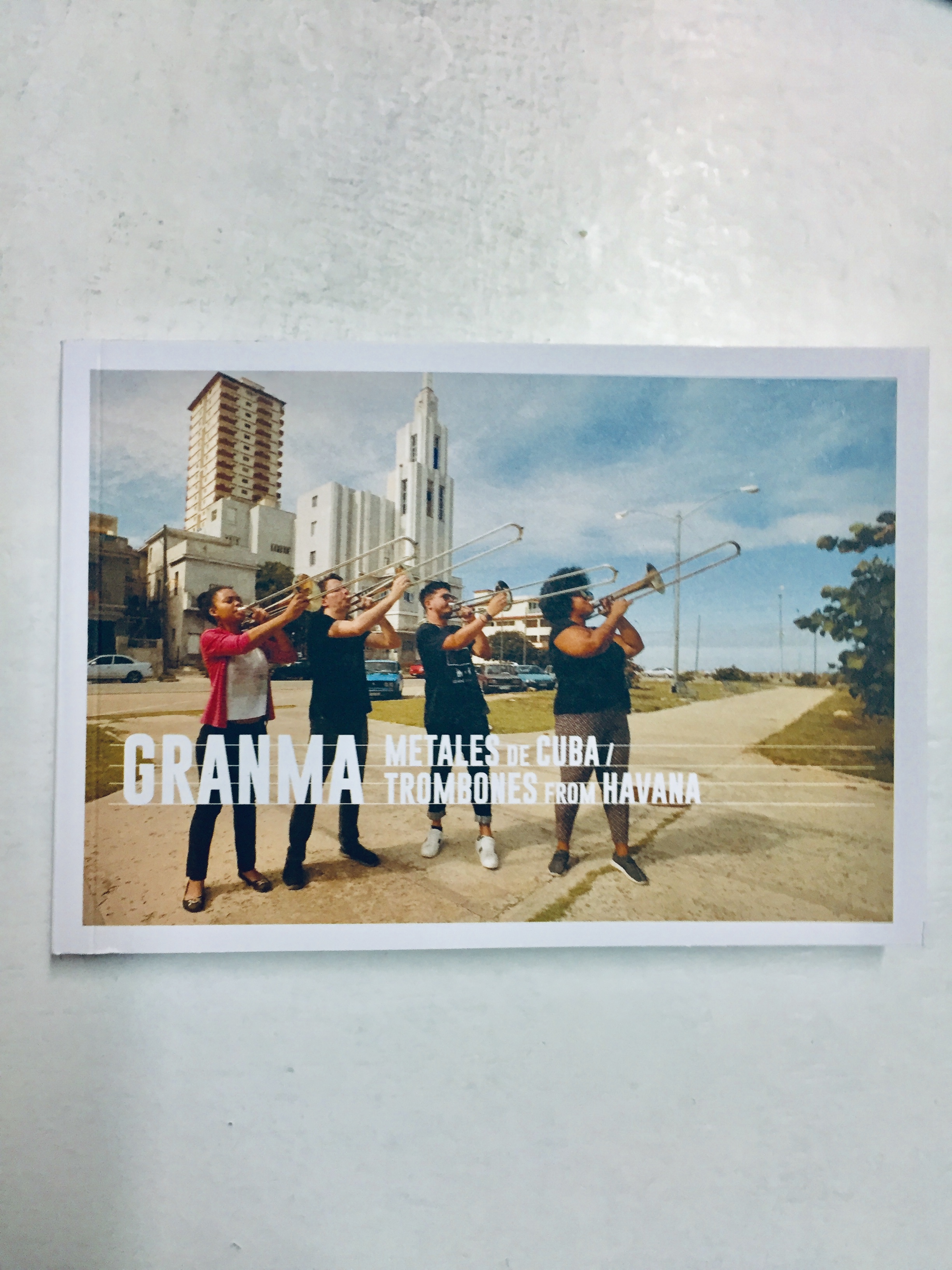 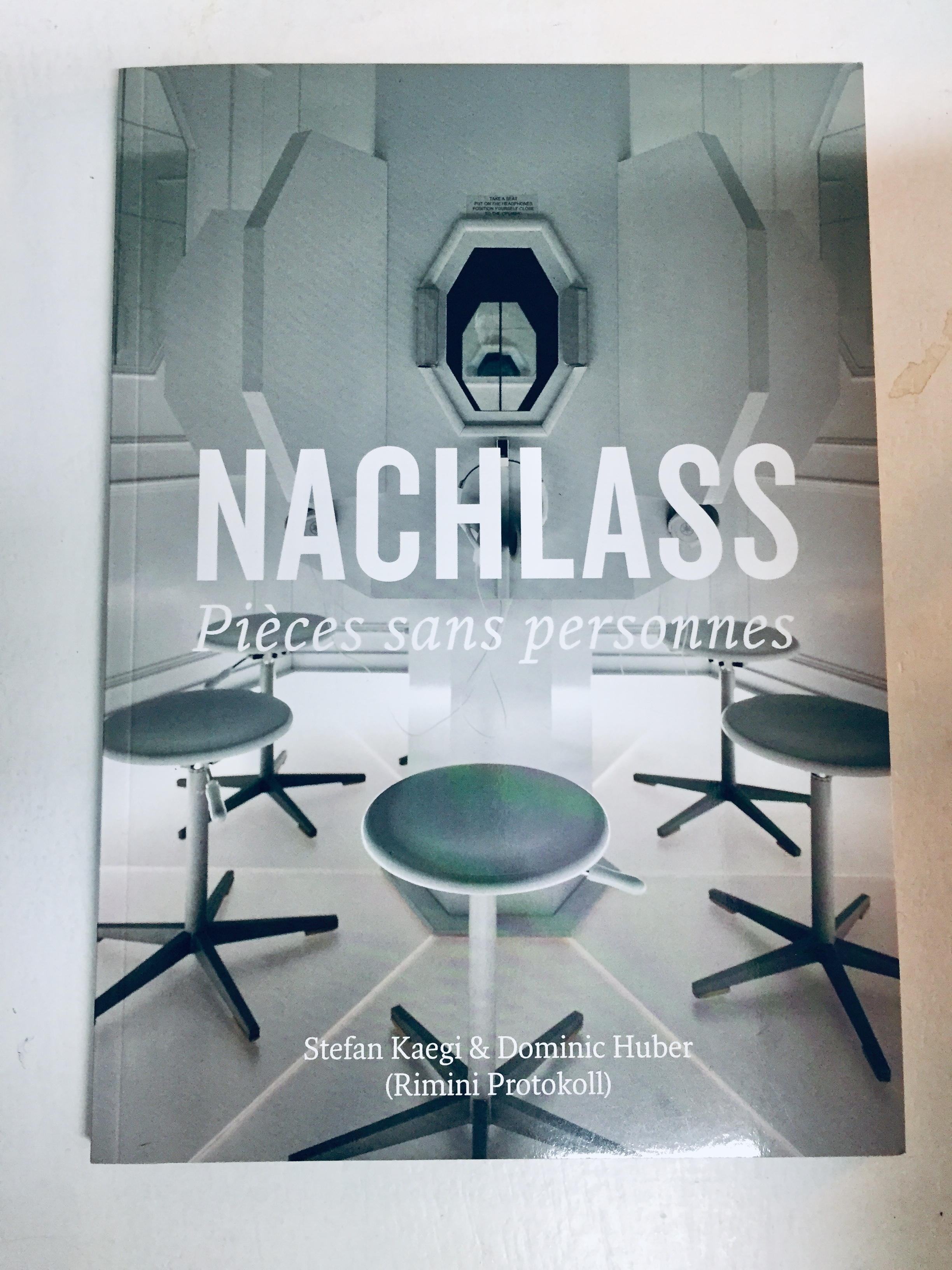 In Everything: And Other Performance Texts from Germany, Matt Cornish gathers texts drawn from performances by five of the most renowned theater collectives working today: andcompany&Co., Gob Squad, Rimini Protokoll, She She Pop, and Showcase Beat Le Mot. Drawn from theater events variously described as documentary, post-dramatic, and live art, the texts collected in Everything seldom look or read like plays—some comprise rules for improvisation; others could best be described as theatrical scenarios; a few are transcripts; one includes a soup recipe. Yet amid these dramaturgical tests and trials, one finds poetry: heartbreaking stories of disability and triumph as well as strange, disjointed fairy tales interrupted by communist songs.

This volume is an extension of the original theatrical experiments. For the reader, the texts are calls to action. They ask one to do things: watch the news, listen to music, make soup, and dance. While the groups do not mean for actors to repeat the words printed here, they invite the reader to adapt their ideas and rules to make their own entirely new productions. 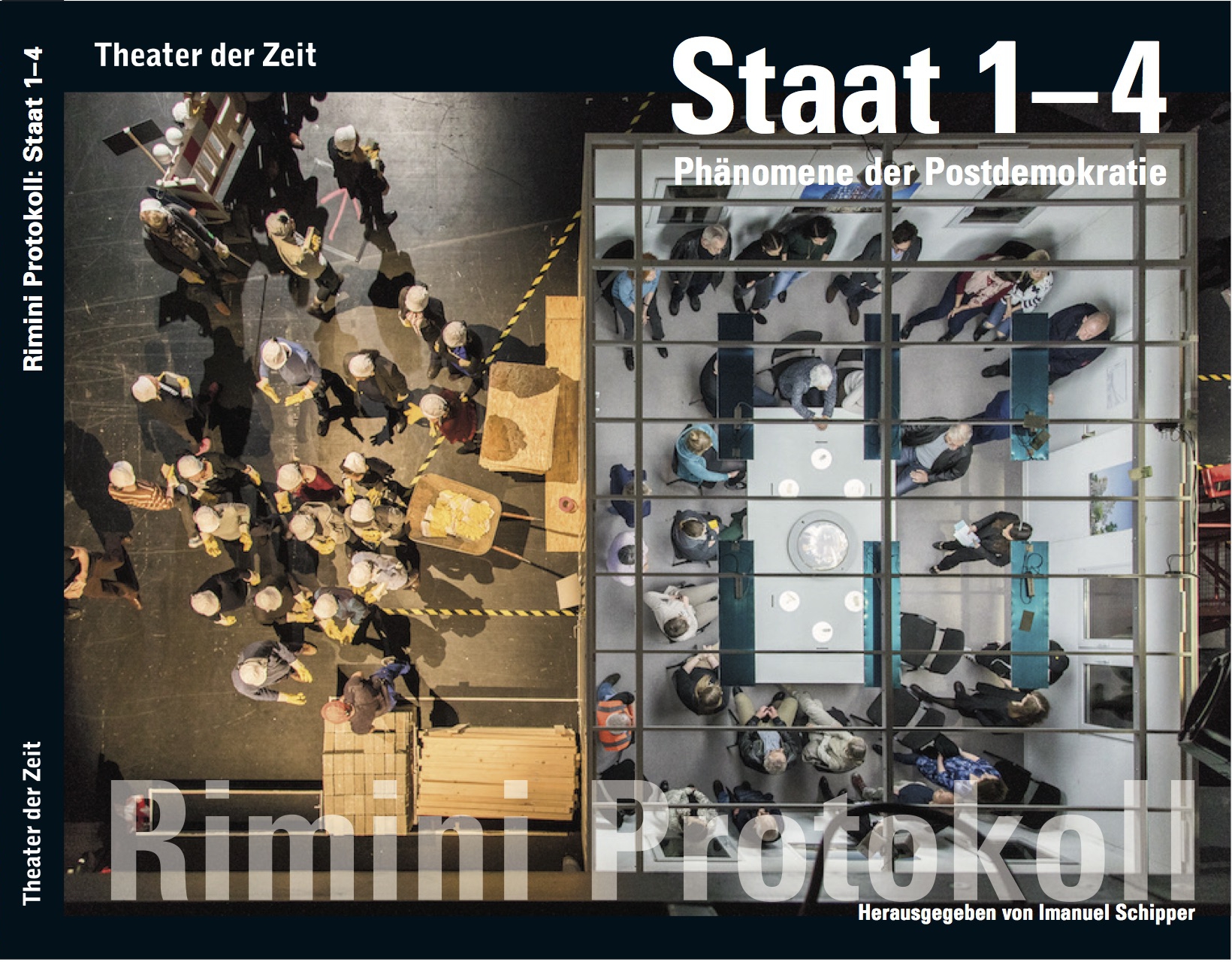 Rimini Protokoll: Series State 1-4 Phenomenon of Post-democracy
Editor: Imanuel Schipper
Paperback with 204 pages
Size: 260 x 210 mm
ISBN 978-3-95749-133-6
With numerous colored illustrations
22,- Euro
Publisher: Theater der Zeit
In four theatre productions (Top Secret International, Society under Construction, Dreaming Collectives.
Tapping sheep and Davos: State of the World) shows Rimini Protocol interactive scenic results of a research trip along the edges of the democratic legitimated state. Diary entries and snapshots provide insights into the production process. Impressive photos of the performances from unusual perspectives and excerpts from the scripts document the unique methods of dealing with the audience. Sociological, philosophical, media-scientific and political essays (by Ganga Jey Aratnam, Lukas Baerfuss, Timon Beyes, Matthias Fuchs, Dieter Läpple, Gabriela Muri, Imanuel Schipper and Hannah Trittin) pose the questions together with Rimini Protokoll: what is true about the fear that PR strategists and privately funded advisory and advocacy teams snatch the control of an increasingly global acting society from the hands of its politicians? Does the state in its neo-liberal form consists only of formal but weak  empty sleeves? Is democracy just a name for something that we do not want anymore - even though we actually would like to have it?

A publication by Rimini Protokoll in cooperation with the Haus der Kulturen der Welt as part of 100 Years of Now. Funded by the Federal Government Commissioner for Culture and the Media due to a ruling of the German Bundestag. 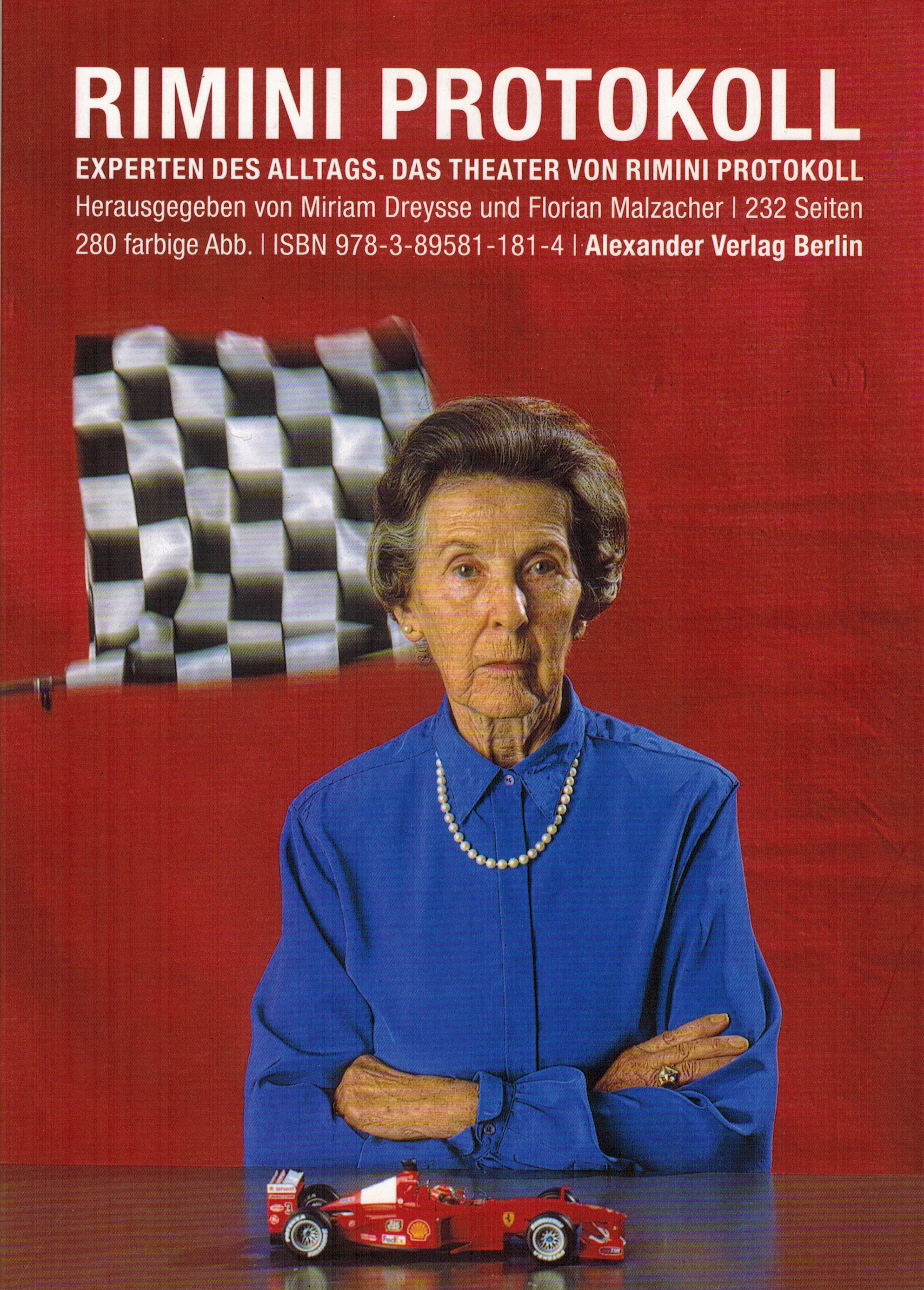 Elderly ladies, teenagers, unemployed air traffic controllers, talented mayoral candidates, Vietnam soldiers, counsellors, Bulgarian longdistance lorry drivers, Indian call centre workers – "real people" are always at the centre of Rimini Protokoll's directorial work. Experts of their daily lives, they are the defining aspect of the documentary work of Helgard Haug, Stefan Kaegi and Daniel Wetzel. It is rare that the clash between fiction and reality is made so clear, and simultaneously so emotional and playful, as in the theatre of Rimini Protokoll.
In this volume, journalists, academics and artists present and reflect upon the stage productions, as well as the site-specific works, audio tours and radio pieces of the successful trio of directors. With numerous colour photographs and a complete catalogue of works.